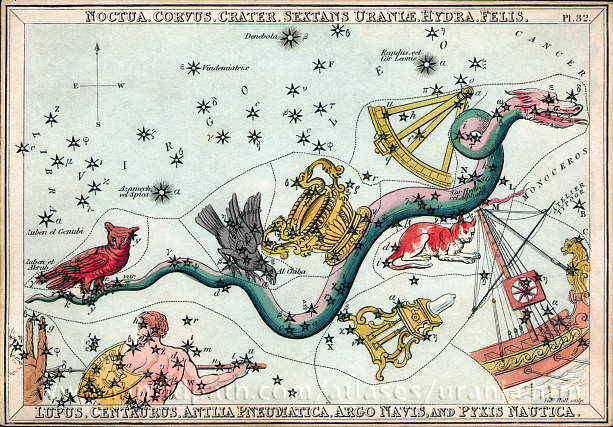 The water snake Hydra slithers across the southern sky. The largest and longest constellation of all, it takes nearly seven hours to rise completely into view.

History and myths
The ancient Babylonians had two constellations relating to snakes, and one of them was adapted by the Greeks as Hydra. So when Ptolemy (c. 98-c. 168 CE) described Hydra in his classic work Almagest, it had been a constellation for around a thousand years. Although it's the biggest of today's 88 constellations, it used to be even bigger. However it was so unwieldy that a succession of stellar cartographers took some of its stars to form some new constellations.

There are many variations on the stories attached to Hydra. In one of them Apollo sent his raven with a cup to fetch a drink of water from a spring. But the bird saw ripening fruit on a fig tree, and waited for it to ripen so he could eat it. He then returned to Apollo claiming that he was delayed because the water snake was blocking the spring.

Apollo didn't believe this story and threw the bird, the cup and the water snake into the sky as the constellations Corvus, Crater and Hydra. Hydra had orders to guard the cup of water so that Corvus would be perpetually thirsty. (You can see this imagined in the header illustration.)

But the most dramatic stories tell of one of the labors of Hercules. Far from being an innocent water snake, Hydra is a poisonous nine-headed serpentine monster who terrorized the countryside around Lerna (in classical Greece). Its lair was a deep cave in one of the springs for which Lerna was famous, and the area was reputed to have an entrance to the Underworld.

Hercules was given the task of destroying the creature. Even for a demigod, this wasn't going to be easy. One of Hydra's heads was immortal, and if one of the others got chopped off, two more grew in its place. However Hercules organized his attack with the help of his servant Iolaus. The hero attacked, and when he whacked off a head, Iolaus cauterized the stump with a burning brand so that a new one couldn't grow. Finally, with a golden sword given to him by the goddess Athena, Hercules cut off the Hydra's immortal head. He buried it, ensuring that it stayed buried by putting a great heavy rock on top of it.

Stars and planets
Although Hydra is a large constellation, it's not familiar to most people. It's not only spread out, but also has only two stars that are brighter than third magnitude. (The higher the magnitude number, the dimmer the star.)

Alpha and Gamma Hydrae
Hydra's brightest star is Alphard (Alpha Hydrae). Its name comes from the Arabic for “the solitary one” and certainly it has no nearby bright neighbors. Alphard is fifty times the size of the Sun with three times its mass. In earlier times, it was sometimes known as Cor Hydrae, the “heart of the serpent”, a name that the great Danish astronomer Tycho Brahe (1546-1601) gave it. The second brightest star, Gamma Hydrae, is a yellow giant some thirteen times the size of the Sun and over a hundred times more luminous.

Both of these stars are less than ten percent of the age of the Sun. Yet they will die long before the Sun does. Massive stars burn brightly, but burn out quickly.

They are the only stars of Hydra to appear on the Brazilian flag. The flag is both astronomical and symbolic. It shows the positions of the stars over Rio de Janeiro on the morning of November 15, 1889, which is the day the republic was declared. The designer chose a time in which the Southern Cross was at the meridian and Gamma and Alpha Crucis were vertically aligned. There is a star for each Brazilian state and one for the Federal District. Alphard symbolizes Mato Grosso do Sul and Gamma Hydrae represents Acre.

A five-star system
Epsilon Hydrae is a multiple star system of at least four stars, but probably five. Epsilon Hydrae A (ε Hya A) and B (ε Hya B) form a binary. The dominant star is ε Hya A, a yellow giant nearly seventy times brighter than the Sun. In addition, orbiting both each other and AB is the spectroscopic binary ε Hya C. In a spectroscopic binary we can detect one star, and the light spectrum shows evidence of a second one. The fifth star is distant ε Hya D. It's in a 10,000 year orbit, but there is evidence that it's gravitationally bound to the system.

Stars with planets
There are at least eighteen stars with planets in Hydra. I think the most interesting one is V Hydrae, which is a carbon star. Carbon stars are red giants that have fused helium into carbon. Some of it makes its way into the outer layers of the stars as a fine soot. The soot scatters away light from the blue end of the spectrum, but lets redder light penetrate it. This gives carbon stars a striking red appearance. V Hydrae is a variable star and has a planetary system with at least two planets in it.

Deep-Sky Objects
Hydra has a number of deep-sky objects, but modern telescopes have been needed to appreciate them. You can read about some of them by clicking on the link below to Hydra the Water Snake – Deep Sky Objects".

You Should Also Read:
Hydra the Water Snake – Deep Sky Objects
What Are Constellations
ABC of Astronomy - D Is for Double Star

Like astronomy? Join us at the Astronomy Forum to discuss it with like-minded people. All welcome.

Moons of Uranus - Facts for Kids 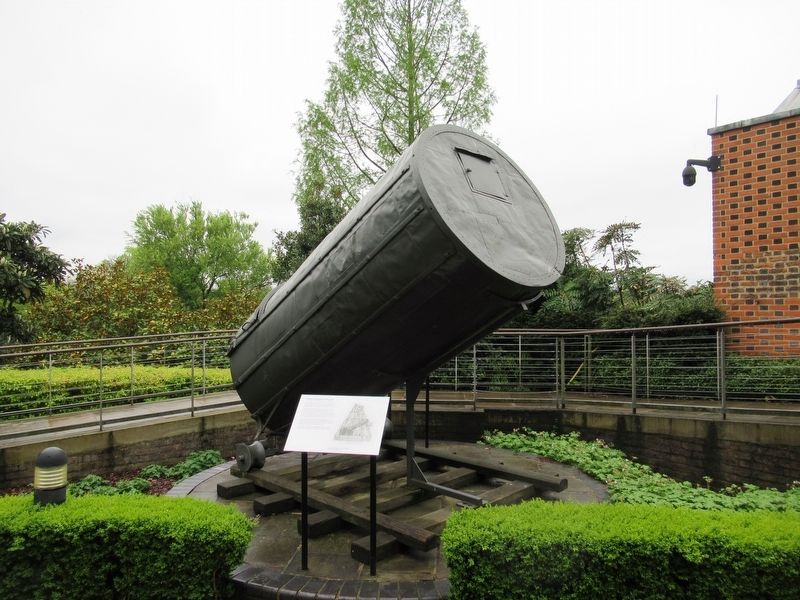